Putting it all together with virtualenv (and foreman)

(This is the final (possibly) article in a series of four, and follows on from Docker services. Code from this series of articles is available on Github as yunojuno/trifecta, and the VM is available on Atlas, the Vagrant box repository hosted by Hashicorp.)

If you've been following this series to date, you will now have a vanilla Vagrant VM set up, with a set of docker containers running core services. It should look like this:

The thing that is missing from this picture is your application. What we want to see is this:

(Before getting in to the details, the obvious question is "why Virtualenv, and why not Docker given that you use it everywhere else?" Whilst docker is great for running stable apps / services, it's not the right tool for live development. When your app is being worked on, it's inherently unstable, and in any given development session, a developer may need to run manage.py runserver, migrate, makemigrations, shell, and so on. Docker is simply the wrong tool for the job. So Virtualenv it is.)

Setting up your app in virtualenv is something that, if you are developing python web applications, you should already know about (and if not, start here). Suffice to say the trifecta VM contains Virtualenv and Virtualenvwrapper, so 'activating' your application is as easy as:

In your app configuration, you can link to all the external services using localhost and the default port numbers in the diagram above. The rest of this article is about the specifics of configuration, and the commands and aliases that you may find useful.

In order to demonstrate how this all fits together, the trifecta project on Github has a sample project, demo_app, which is a v. simple Django app that contains a test suite that 'pings' the various services that we have set up:

In order to get this project up and running within the trifecta project, first you need to initialise the VM:

Once we are in the box, the following will set up the demo project:

The tests will fail at this point, complaining about a missing setting DATABASE_URL. This is because we are following Heroku's 12-Factor App philosophy, and expecting to find the setting in our local environment variables. Setting up local env vars can be a pain locally, where you are having to manage multiple projects, all with their own configuration. In order to make this simple, we follow the instructions and use Foreman - described by Heroku as "a command-line tool for running Procfile-backed apps." In this instance we are only using it to hoist local settings into the env vars from a .env file. If you look at the demo_project directory you will see the following files:

And inside the .env file:

If we now run the tests using foreman:

We now have all the required settings. However, the tests will still all fail, for the very simple reason that none of the required services are actually running.

We know from the previous article (Docker services) that we have the service containers on the VM, but they are not currently running. We have to start them. They are configured to run using the /vagrant/docker/docker-compose.yml file, and so we can spin them up using:

Et voila. We (should) have a working Django project, running inside a virtualenv, connecting to Postgres, ElasticSearch, Memcached and Redis, all of which are running as Docker containers.

The final piece of the puzzle is to get Nginx talking to the Django dev server to actually serve a web page. We know from the /vagrant/etc/nginx/sites/demo_app.conf file that Nginx is expecting the Django app to run on 127.0.0.1:8000, which is the default Django runserver port, so it should be as simple as:

Now lets fire up a browser and go to 192.168.100.100 from the host machine (the Vagrantfile specifies that as the local network IP). You should see this: 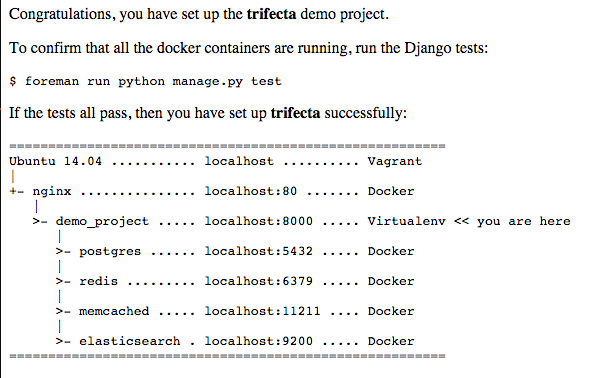 The trifecta VM is now available on the Vagrant box repo, Atlas, under yunojuno/trifecta, which means that you can create a trifecta project by building off this in your local Vagrantfile (using config.vm.box = "yunojuno/trifecta").

The box doesn't contain the demo project - in order to run your project on the VM simply follow the pattern above, replacing the demo_project directory with your project.